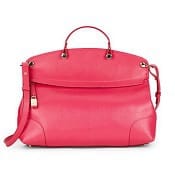 Our daily TPS reports suggest one piece of work-appropriate attire in a range of prices. Ooh: I love the clean lines of this briefcase-like tote from Furla. I’ve pictured it in pink here, but it’s also available in basic black as well as cream. Love the size (14″W x 10″H x 3″D), the metal feet, and all of the available pockets. The bag was $448, but is now $239.99 at Saks Off Fifth. Furla Piper Top Handle Saffiano Leather Tote Here’s a lower-priced option in pink. Seen a great piece you’d like to recommend? Please e-mail [email protected] (L-4)