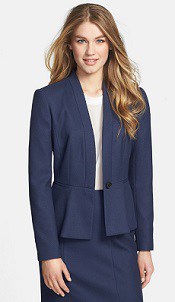 Hooray for Thursday! I’m liking this diamond stretch peplum jacket, available in navy and black, both on sale 40%. The black blazer has some matching bottoms still (pencil skirt, pants), but the navy seems to be standing alone. The blazer was $138 but is now marked to $82.80. Halogen Diamond Stretch Peplum Jacket

« Suit of the Week: Ann Taylor
How to Deal with Political Talk at the Office »

« Suit of the Week: Ann Taylor
How to Deal with Political Talk at the Office »
Back to Top