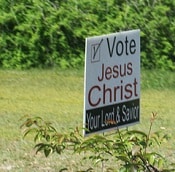 How do you handle a lot of religious and political talk at the office — particularly if you disagree with it?  Reader S wonders:

Could you do a post about politics at the office? I am a moderate liberal, and my approach has always been to avoid discussing politics at work at all, except when necessary to serve the needs of a client (i.e., analyzing a judge’s leanings or referring a client to a PR/lobbying specialist). I now find myself in a small-ish firm (about 35 attorneys) in a conservative, evangelical region, and political conversations are very common in my office. Some of the partners with offices near mine are constantly making derisive comments about president Obama and his policies, the liberal agenda, the liberal media, etc. Sometimes the critiques venture into gender issues. I find many of the things they say to be pretty offensive. I try to avoid participating in the conversations as much as possible so they don’t ask me what I think, but I can’t help overhearing them. Do you have any advice on how to handle this situation, short of (or until) leaving the firm?

I’m curious to hear what readers say here, but in this particular situation, this sounds like a Fit Issue.  A big time, capital letters, serious fit issue.  It sounds like you don’t agree with or respect their opinions regarding politics or religion, and you feel like your opinions wouldn’t be respected either.  Not only is it unpleasant and awkward at work, but honestly I think your career prospects are also limited, because Fit is a major reason why people get promoted (or don’t).  So: for you, it’s time to move on.

Two questions remain.  The first: how to find a place with a better fit? I’m particularly curious to hear what the readers say.  As a fellow moderate, it’s always seemed far easier to find groups on the far left or the far right rather than to find a moderate group.  You may want to do what I did — focus on a niche that you can get behind 100% and see if you can put up with the people in that niche.  Another option that might be worth considering if you’re already established in a general practice: starting your own practice, where at least you can decide which clients you work with.  Working with a recruiter or headhunter may also give you a better experience, because he or she may know the personality of the firms before you apply.

The second question that remains is:  how to handle the awkwardness while you’re there?  I’ve written before about how to change the topic of conversations, but here (particularly with regard to gender issues), it’s ok to respectfully disagree with people or point out ignorant or untrue assumptions on which their opinions are based.  (A favorite reader tactic from our last discussion: asking them to please explain the joke, because you don’t understand why it’s funny.)  If this were me, for my personal happiness I’d try to stay away from really pushing the issue — I doubt that you will change their opinions — but that said, every conversation is different.  Another option: try to move your office away from the people making the comments and see if the environment is different in another corner of the building or on another floor.

My answers might be different if these comments came from a a small group of people at the office, or if they really veered into sexism or misogyny — and Reader S still may want to consult with a employment lawyer or with HR — but it sounds to me from Reader S’s email that this is an office culture that’s just wrong for her.

Readers, how have you handled it when religious or political talk was common at your office? How do you move on (and how quickly can you move on) once you’ve determined there’s a fit issue?