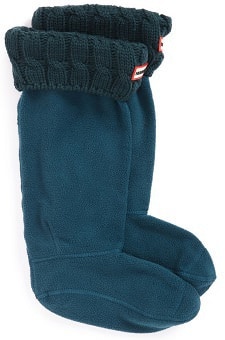 The weather is getting colder, which means you’ll soon find yourself dealing with slush and ice as well as cold rainy days. So take a look at these Hunter Welly Boot Socks — they’ve been around for years and are well reviewed, and everyone loves them. I never see them on sale, but Nordstrom actually has them on sale right now — admittedly in some very bright colors, but I think they’re fun. (More colors are here.) The socks come in sizes M and L and they’re currently marked down to $33 from $50. For an even lower-priced option from Hunter, here’s a style that’s on sale at Nordstrom for $19/pair (without the cable-knit cuffs, though). Hunter Original Tall Cable Knit Cuff Welly Boot Socks (L-all)