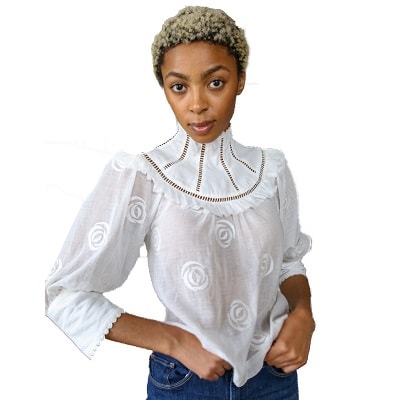 How pretty is this frilly cotton blouse? A crisp white blouse is a summer must-have. I particularly love the rose motif on this top from Hope for Flowers by Tracy Reese. For those of you who are looking for slow fashion and/or 100% cotton tops, this is for you. The entire product line is made from sustainable fabrics and is created by one of Michelle Obama’s favorite designers.

The top is $198 and available in sizes 0–14. Ivory Victorian Blouse

* If you'd like to avoid the moderation queue in the future, please make sure that the two two fields (User Name & Email Address) are filled out, and the checkbox is checked. BOTH can be fake/anonymous but e-mail must be formatted correctly. We're testing a "reporting" system for comments but not everything can be reported. Please reply to the questionable comment with the phrase "PLITK"; your comment will go to the moderation queue and we'll review the thread as soon as we can. THANK YOU FOR READING!!! Back to Top