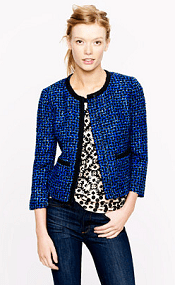 Maybe it’s my screen, but the blue tweed just pops out at you — which, of course, I love. The black trim… the saturated indigo/sapphire colors… gorgeous. I particularly like how it’s been styled with another print here: it’s just a bit daring.  It’s $198 at J.Crew, available in sizes 00-14. Lady jacket in blue tweed