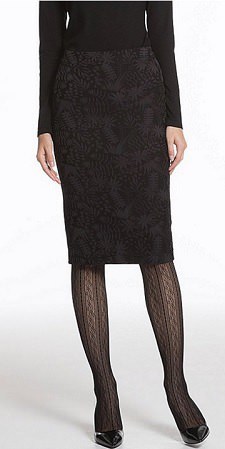 Happy Friday! Jacquard isn’t always right for the office, but this pretty $39 skirt from the Carine Roitfeld collection with Uniqlo looks pretty great. I like the way they’ve styled it here with textured tights — it’s a very subtle way of mixing prints — but of course you could tone it down with plain black tights or hose. Carine Jacquard Print Skirt Looking for something even more affordable? This black flippy skirt is only $25, and this textured plus-size skirt looks great. Seen a great piece you’d like to recommend? Please e-mail [email protected] (L-all)