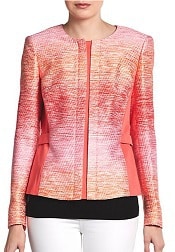 I continue to be obsessed with the Off Fifth sale going on right now. Today I’m liking this bright, happy, and yes, Very Springy ombre tweed jacket from Lafayette 148 New York. I think the solid side panels are flattering and interesting, too. The jacket was $548, but is now marked to $210 at Off Fifth. Lafayette 148 New York Bentley Ombre Tweed Jacket

« Coffee Break: Sweet Pea File Folders
What To Do When You’re Overqualified »

« Coffee Break: Sweet Pea File Folders
What To Do When You’re Overqualified »
Back to Top