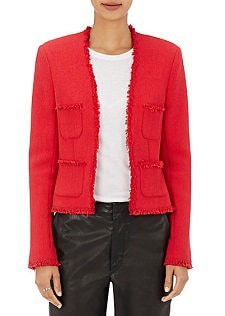 Our daily workwear reports suggest one piece of work-appropriate attire in a range of prices. L’Agence is a great brand to watch for mostly classic, elegant, slightly trendy workwear. This red tweed jacket (also comes in navy) is great –I love the fringe, the patch pockets, and the darts. The jacket is $475 at Barney’s. L’Agence Tweed Jules Jacket A few lower-priced options are here, here (30% off), and here (on clearance), and here’s a plus-size alternative. Seen a great piece you’d like to recommend? Please e-mail [email protected] (L-all)