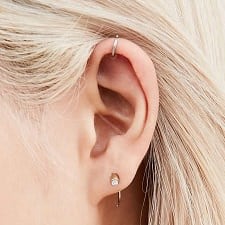 If you hate posts as much as I do, you may like these affordable “threader” earrings from Urban Outfitters. (In the picture they’re the one in the bottom part of the model’s earlobe, not the top.) They look comfortable, elegant in a really modern way.  They’re $45.  Luv Aj Vertigo Coil Threader Earring

Psst: Bloomingdale’s just started their Friends & Family sale — use code FRIENDS at checkout and take 25% off select regular, and sale-price items. In other sale news, J.Crew is offering 50% off final sale with code SHOPSALE.

« How to Avoid Getting Hangry at Work
Tuesday’s Workwear Report: Epply Lace Top »

« How to Avoid Getting Hangry at Work
Tuesday’s Workwear Report: Epply Lace Top »
Back to Top