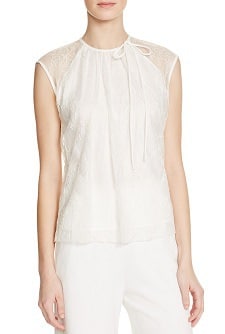 Our daily workwear reports suggest one piece of work-appropriate attire in a range of prices. What a pretty white top! Lace can definitely be a “know your office” situation, but if it’s a possibility for you I think this would look lovely under a suit jacket, particularly a navy or gray suit. It’s $250 at Bloomingdales, but use code FRIENDS to take 25% off. Sandro Epply Lace Top Here’s a lower-priced option; two plus-size alternatives are here and here. Seen a great piece you’d like to recommend? Please e-mail [email protected] (L-5)

« Coffee Break: Coil Threader Earring
Stylish Work Sneakers For Women (And Advice On What Should Women Wear While Canvassing) »

« Coffee Break: Coil Threader Earring
Stylish Work Sneakers For Women (And Advice On What Should Women Wear While Canvassing) »
Back to Top