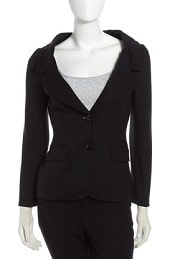 Last Call has a lot of lovely designer duds on sale (like this or this), but for today’s TPS report I’m picking this ponte jacket. I’ve always associated the wide-necked style with much more expensive designers (like Donna Karan, where the jackets are usually north of $1500), so I like that this one is so reasonable after the sale — and I like that it’s in ponte, which I always find much more comfortable than other blazer materials. The neckline will take some playing, to be sure — I’d try a boatneck or perhaps a very wide V-neck with it first, but I’d probably try it with half my closet to see what I liked best (this used to be one of my favorite ways to spend a Saturday afternoon; I called it “playing closet.”) Anyway: this blazer is still available in sizes 40-46, and is on a great discount: was $995, then marked to $495; with the extra 30% off it comes down to $346.50. Moschino Cheap & Chic Wide-Neck Ponte Jacket