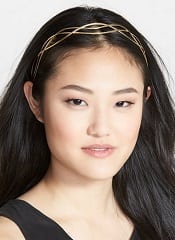 Here’s a serious question: are headbands ever appropriate for the office? I am normally in the “no” camp (at least for most women) but this two tone gold number has me questioning that. I like the thin, spindly nature of this one, which looks both delicate and comfortable. It’s (!) $70 at Nordstrom. Mrs President & Co ‘The Urbanista’ Headband

Here is a lower-priced version (also here and here).