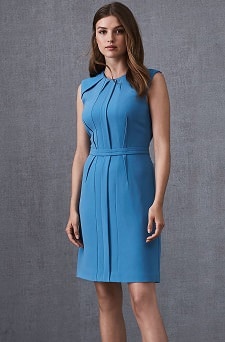 I’m a bit funny with pleats — I’ve seen probably two pleated skirts in my life that I’ve liked, and yet I always like pleats elsewhere on a dress as a structural point of interest, such as here with the neckline detail. I wish the dress were just a smidge longer as styled on the model, but that’s me. The dress is $345, and available in most sizes 0-12 at Reiss. Nala Dress

Looking for a more affordable option? This previously featured dress is now down to $14(!!) (final sale), and this pretty blue wrap dress comes in regular and plus sizes for $70-$76. Another great option (but not much more affordable than the featured dress) is this blue Boss dress, now marked 50% off.

Update: Link fixed! Sorry about that!

« Workwear Hall of Fame: Julianne Flats
How to Style a Sweater as a Layering Piece »

« Workwear Hall of Fame: Julianne Flats
How to Style a Sweater as a Layering Piece »
Back to Top