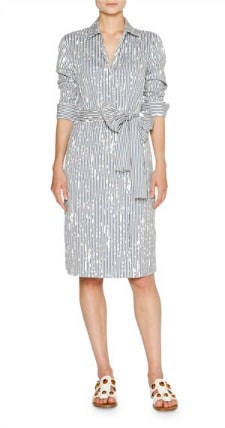 This cute painter-stripe dress reminds me of one I had years ago from Uniqlo (although it was a lot more affordable than this one). I love the stripe, the cuffs, and the belt, especially styled as a bow — it’s a cute and classic look. The dress is $990 at Bergdorf Goodman (and there’s a Tomas Maier shirt in this pattern at Neiman Marcus for $650). Tomas Maier Painter Stripe Poplin Shirtdress, Blue Pattern

Here are a few more affordable options, in regular sizes and plus sizes.