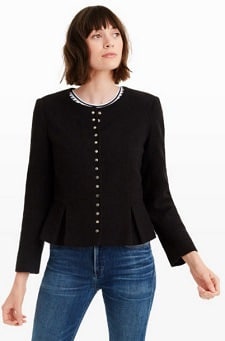 I love the nubby texture and snap front on this cotton/poly jacket from Club Monaco, as well as the peplum details. I like it as pictured, with stripes, but also think it would look great with just about any top. It’s $289, at Club Monaco.   Drystan Jacket

Here’s a more affordable peplum option in regular sizes, and one in plus sizes.

« Workwear Hall of Fame: Michelle Pump
Tips on Changing Careers »
Back to Top