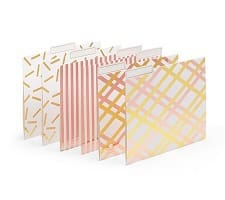 If you’re on the hunt for cute office supplies, Poppin has a ton of bright, happy desk accessories in lots of bright colors. These rose gold folders aren’t in one of Poppin’s main colors, but they’re too lovely not to post. They’re $10 for a set of 6 at Poppin. Poppin File Folders, Assorted Metallic Prints