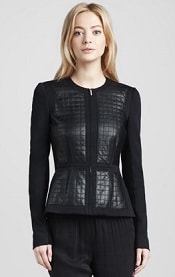 The quilted leather look is one of the big trends for fall, and while I like it, I think it works best when it’s mixed with other, non-quilted materials. This gorgeous jacket from Rebecca Taylor is a great example — it has a very buttoned-up but feminine look to it, and I suspect the crepe would be very comfortable. It’s $595 at CUSP. Rebecca Taylor Quilted-Leather-Panel Jacket

« Coffee Break: ‘Light Bright’ Ponytail Holder
The Best Blouses for the Busty »
Back to Top