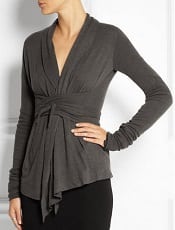 This look — the widely belted cardigan — has been around for a few years now (if not always?) and I really like it. It’s a flattering look for a lot of women, and it’s got enough structure that it looks almost as formal (IMHO) as a blazer separate. This stretch-jersey one (with touches of wool and angora) is $760. Gorgeous. (It looks like you can get other colors of the same cardigan on sale, such as at Yoox.) Rick Owens Lilies Jersey Sweater

Psst: here’s a fabulous plus-size option (available in a number of jewel tones).

« Weekend Open Thread
Homing from Work – What Personal Tasks Are OK/Good to Do At Work? »

« Weekend Open Thread
Homing from Work – What Personal Tasks Are OK/Good to Do At Work? »
Back to Top