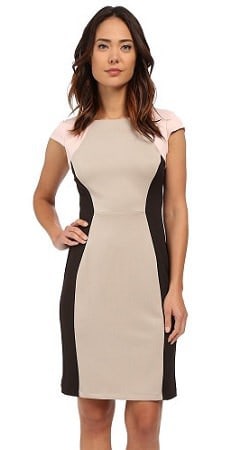 Reader V wrote in to recommend this dress, noting “I’d recommend Christin Michaels Courtney Scuba dress. I think this is the perfect dress, not too dressy, not too plain, never wrinkles and makes any figure look like an hour glass figure. In black taupe and pink it flatters practically anyone. It can be worn alone or with a jacket. I have worn mine in trade shows where I have to look good, but also have to work hard and look good – not frazzled.”  Nice! It’s only $47 at Amazon — but it’s also only available in sizes 10-16. The brand has several other scuba dresses available right now though, at Amazon, 6pm and Zappos for $39-$129 — love the mix of colorful patterns and classic shapes, combined with a stretchy scuba ponte; lots of the dresses have pockets, too. Pictured: Christin Michaels Courtney Scuba Dress

On the plus side, this floral scuba dress or this one are both pretty.