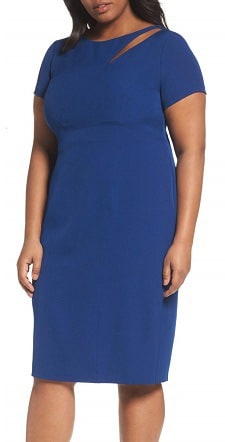 Readers were talking about wanting to see a plus-size pick one day every week, and I think it’s a great idea because we don’t always get our plus-size newsletter out as often as we should. We’ll try it for a couple weeks and see how it goes! To start off, this dress from Adrianna Papell is really lovely. I love that it has sleeves, and I love the jewel neck and interesting slash at the top (and you can still wear a bra with it, which is always the key to something being work-appropriate). It’s only $140, which is nice, and it’s available in sizes 14W-20W (runs large). Seam Detail Stretch Sheath Dress

(If you are interested in plus size workwear, please sign up for CorporettePlus, our newsletter! Signing up helps us gauge interest in the project, and we promise not to blast your email more than once a week at most. (Right now it’s more like once a month.)

« Coffee Break: Asher Drop Earrings
How to Keep Track of Work To-Dos »
Back to Top