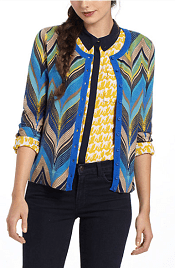 The outfit here is a bit, um, casual/creative — but that sweater is amazing. I love the “seared chevrons” on this cardigan — it’s a bold and graphic look but also, I think, a fun twist on what I generally think of as a traditional pattern. I would wear the cardigan open over sheath dresses, and buttoned up under blazers and with trousers. (The turquoise color is shown here; there’s also a more subdued “blue motif” pattern as well.) Gorgeous. It’s $118 at Anthropologie. Seared Chevrons Cardigan