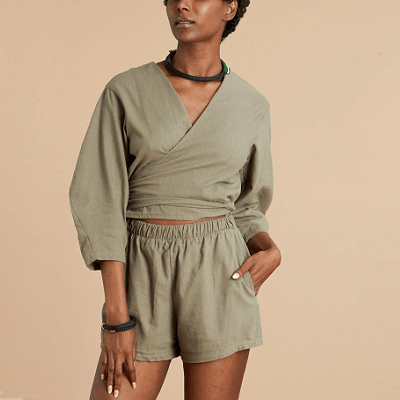 I’m not much of a jumpsuit person — and I’m really not a jumpsuit romper person — but back when I was exploring lots of new Black-owned stores and designers to me I fell in love with this jumpsuit from Selfi. It’s been sold out for a few weeks now, but is slowly coming back in stock, right now just in the avocado color. (I’m holding out for the teal!)

It looks effortlessly cool, in both the “breathable” and “chic” sense of the word. I also like that you can choose how cropped to make the top based on how you tie it. Lovely.

The Folklore, by the way, is a great boutique to know if you’re trying to shop more consciously:

The Folklore is a New York City-based multi-brand online concept store and wholesale showroom that allows U.S. based and international customers to easily shop exclusive styles from Africa and the diaspora’s top luxury and emerging fashion brands.

Nice! The jumpsuit is $155 at both The Folklore and Garmentory. Selfi Jumpsuit