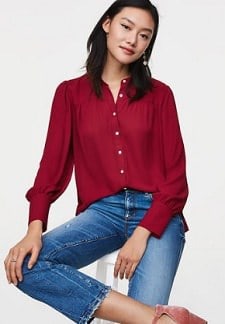 I know readers have noted success in the past with Loft’s utility shirt, but I am generally anti-pockets on blouses. So when I saw this lovely shirred yoke blouse I thought, yay, no pockets — and how pretty! I think it looks feminine and slightly romantic/boho but still 100% appropriate beneath a blazer or with a pencil skirt or some other structured piece. Pretty. It’s available in regular and petite sizes XXS–XXL, and it’s $49.50 at Loft — but code NEWNOW will give you 40% off. Shirred Yoke Blouse