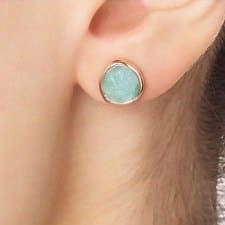 I’m a big fan of Monica Vinader because her designs are delicate and organic and just really lovely. I like the green (Amazonite) we’re featuring here but this earring also comes in a more unobtrusive rose quartz/rose gold (fun fact: rose quartz is supposed to attract love, if you’re interested in that sort of thing). This seems like the perfect post earring, and it’s described on the product page as adding “coastal glamour to the hand-faceted stones of vermeil stud earrings inspired by the artfully imperfect shapes of sea-worn treasures.” This did not strike me as a sea-worn treasure until it was described as such, but I like the imperfect circle and all of the facets of the stone — I think it’s gorgeous. The earrings are $175 at Nordstrom. ‘Siren’ Semiprecious Stone Stud Earrings