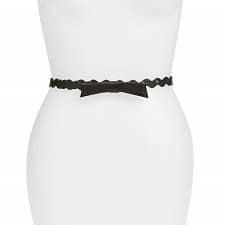 Where are your favorite places to get skinny belts to go on top of dresses, readers? I always see them on sale at Loft or Ann Taylor — but Kate Spade at Nordstrom often has a bunch, and they often go on sale. This fun zigzag belt (in a “rickrack-inspired shape”(?)) would be great for dresses and tucked in looks — it was $58, but is now marked down to $34.  rickrack skinny belt

« What Boots to Wear With Tights to Work
Tuesday’s Workwear Report: Scuba Crepe Sheath Dress »
Back to Top