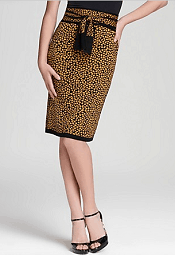 I love this skirt. The contrast hem, the high waist, the matching belt — gorgeous. The pattern reads more “abstract” to me than “brown dalmation” (do such things exist?) but either way it looks fabulous. One minor complaint: for the price you’d think they could afford to throw a zipper in the mix, but perhaps the pull-on style is just fine. It’s $640 at Bloomingdale’s. Sonia Rykiel Skirt – Dalmation Print Cotton Jacquard Pencil