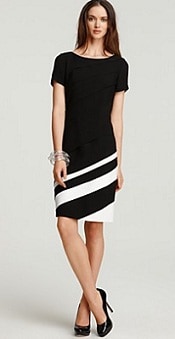 Love this simple black shift dress from Anne Klein New York. The boatneck and sleeves make it very wearable for the office, but the diagonal stripes makes it interesting and a bit playful. I’d wear it in a classic way with pearls and nude-for-me pumps, or perhaps have a bit of fun with it with some contrasting colors: perhaps a long vintage yellow necklace and purple pumps. Lovely. It’s $425 at Bloomingdale’s. Anne Klein New York Silk Georgette Diagonal Striped Shift Dress

« Weekend Open Thread
The Hunt: Sheath Dresses »
Back to Top