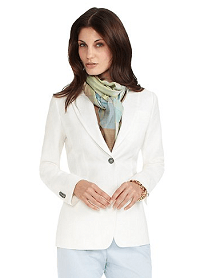 Even though we’ve already had our round-up of summer blazers, this beautiful silk/linen one has still caught my eye.  Part of it might be the styling — she does look distinctive with the scarf so neatly folded (duplicative on someone under 40? Debate, ladies…) but part of it is the quality: Lora Piana fabric. Grosgrain details. Fully lined in silk. The gorgeous blazer is $698 at Brooks Brothers. Lora Piana® Silk Linen One-Button Jacket