So I picked up my glasses yesterday and am really psyched about how they turned out. So first, a quick review of the last 3 pairs of glasses I got from LensCrafters (all purchased during the same “take 50% off lenses” sale sometime in 2007 or 2008): 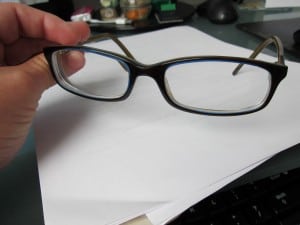 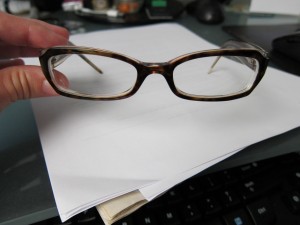 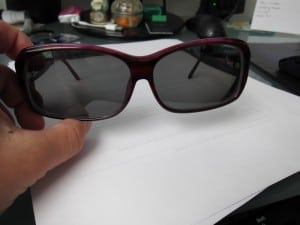 A dark purple pair of sunglasses from Elizabeth Arden – my first pair of “fashionable” prescription sunnies, but they definitely won’t be my last…

These glasses, along with a few other pairs, were my “everyday” glasses for the office, or are now my “I’m leaving the house on the weekend and can’t be bothered to put in contacts but look! my thick frames tell you I’m still vaguely fashionable” glasses. The primary glasses I wear around the house are actually an incredibly old pair of wire frame glasses — they’re lighter, they’re more comfortable, they don’t fall down my nose the way plastic frames do, and if it’s late and my husband and I are watching a movie I can actually fall asleep in them (whereas I feel like the plastic frames will get permanently screwed up). Super super comfortable, but they surely must be one of the top 3 Least Fashionable Things I Own — gold accents, circular frames, etc.

So when I went in to Lens Crafters on Tuesday, I was definitely thinking:
a) no more brown tortoiseshell!  (I think back in 2008 I’d gone to the sale first with a girlfriend, and she helped me pick out the D&G pair.  Then later on I’d gone with my boyfriend (now husband) and he’d helped me pick out the DKNY pair — and so it wasn’t immediately apparent until later that I’d bought two really similar pairs of glasses.  D’oh.)
b) preferably a frame that had springy hinges — none of my plastic frames do and I have to take them in to be “tightened” every so often
c) something fun that I wouldn’t choose normally
d) did a “comfortable” AND “fashionable” pair of glasses exist?

Like I said, I chose about a zillion glasses — clear plastic! Tiffany-blue plastic! a gorgeous pair of brown tortoiseshell glasses with royal blue lining (hellooo, I love royal blue!) a purple pair of plastic lenses! But after trying them all on the ones I liked best were a pair of brown metal Ray Bans — they had the spring hinge, I liked that they weren’t gold- or silver-colored, and of course I liked the tiny touch of royal blue on the sides. I’m really hopeful that they’ll be both comfortable AND fashionable and be my new go-to glasses. 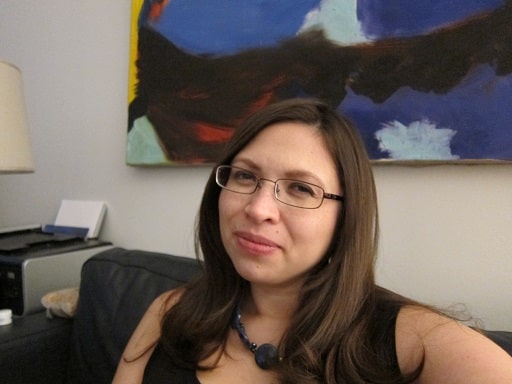 Readers, what kinds of frames do you prefer — wire, plastic, or something else? Do you like to switch up your eyeglasses on a daily basis?

Disclosure: In addition to receiving a free pair of prescription eye glasses, I received monetary compensation to be a LensCrafters Ambassador.