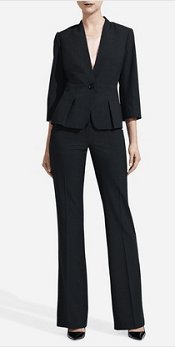 I’m digging the retro vibe of this checked suiting jacket from The Limited — somewhere between the pattern, the three-quarter sleeves, the lack of a collar, the princess seams, and the peplum I’m seeing Rosalind Russell or Myrna Loy. The jacket comes with both matching pants (on sale, natch), and a matching skirt. I think all three pieces could be real workhorses in a growing wardrobe. The jacket (Checked Suiting Jacket) is $128, the skirt (High Waist Checkered Pencil Skirt) is $59.90, and the pants (Cassidy Banded-Sides Classic Flare Pants) were $74.90, but go down to $44.94 with today’s sale: 40% off pants and denim (and free shipping on purchases over $100).