Have you woken up recently and said, “man, if only I could get a suit that was noisy, itchy, wrinkled like crazy, and pulled over my head instead of buttoning up the front?” Then look no further! This avant-garde take on the classic suit jacket has a “unique pullover design,” and — for your noisy, wrinkling, itchy pleasure, is made of organza. Fabulous! If you’re interested, you’d better hurry — the satin pants (Acne Studios Marsy Satin Trousers) are already sold out, and the jacket (Acne Studios Ryde T Organza Shirtjacket), at $1350 is down to limited sizes. The blouse it’s featured with (Acne Studios Clio Tech Poplin Shirt) is a mere $220.

If you’re looking for something more Stop Making Sense-ish, check out this one.

Psst: Since the satin pants are sold out, I suggest you check out these. 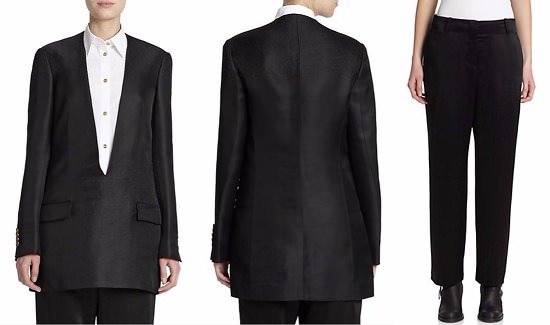