For busy working women, the suit is often the easiest outfit to throw on in the morning. In general, this feature is not about interview suits, which should be as classic and basic as you get — instead, this feature is about the slightly different suit that is fashionable, yet professional.

I am normally not a fan of the short-sleeved suit, but every so often one comes along that really looks gorgeous.  I love the nipped-in waist look to this one, as well as the wide, short short sleeves.  The website doesn’t explain “Cool Wool,” but I like the idea of it — short-sleeved suits in general are great for when it’s blisteringly hot outside.  Was $280, now $98, available at Neiman Marcus (limited sizes only). Belted Cool Wool Skirtsuit 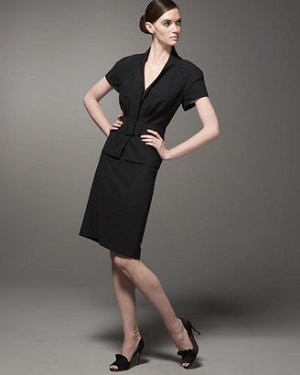