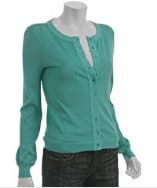 Today,I’m liking the springy look of this turquoise sweater from Alice & Olivia, even though I suspect the buttons are more for decoration than function. I’d wear it with gray trousers anda navy camisole or button-down beneath it. Was $266, now $129 at Bluefly. Alice & Olivia turquoise lurex knit cardigan