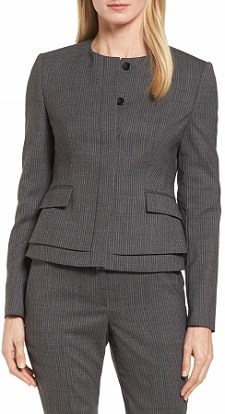 2019 Update: The Nordstrom Half-Yearly Sale has started — check out all our workwear advice and roundups to make the most of the sale! Also, sign up for our newsletter to stay on top of all the great sales!


For busy working women, the suit is often the easiest outfit to throw on in the morning. In general, this feature is not about interview suits for women, which should be as classic and basic as you get — instead, this feature is about the slightly different suit that is fashionable, yet professional.

Happy Wednesday! I’m not usually one for pinstriped suits, but this suit looks absolutely fabulous. I love the high, round neckline and lack of collar, along with the double peplum and pockets lower down. The print itself isn’t what I would call a true pinstripe with a thin, crisp line but rather a chalky hint of a stripe throughout the jacket, which I like because I think it makes it more versatile. The jacket (Jasyma Stripe Wool Suit Jacket) is $595, and the skirt (Titana Stretch Wool Trousers) are $285. There’s also a matching sheath dress.

Looking for something more affordable that also comes in plus sizes? Here’s a navy pinstriped option at Talbots.