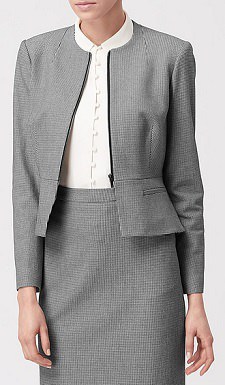 For busy working women, the suit is often the easiest outfit to throw on in the morning. In general, this feature is not about interview suits for women, which should be as classic and basic as you get — instead, this feature is about the slightly different suit that is fashionable, yet professional.  This “micro-houndstooth” L.K. Bennett suit has a very classic, collarless blazer with a zip and peplum, along with a coordinating pencil skirt — it just looks classic and beautiful and easy. It’s available in lucky sizes only, with some labeled “low stock,” so if you like it, buy it now. The jacket (Gaia Jacket) is $395, and the skirt (Gaia Skirt) is $225. Here’s a more affordable option and a plus-size option. (L-all)