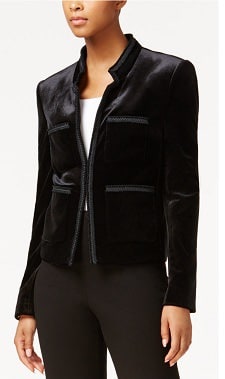 We’re all excited that spring is coming — we can’t wait to pull out our pastels and our happy bright colors. I’m with you, but I’ll also note that now is a great time to snap up winter things like cashmere sweaters and velvet jackets if you’re looking, because they’re all going on deep sale. Macy’s has a number of velvet jackets on sale right now, including this pretty, framed velvet jacket from Tommy Hilfiger. Of course, you probably won’t wear it until November, but you’ll be surprised at how much you’ll like a velvet jacket for the office — and for holiday parties and as a topper for dresses and going out, etc. They’re a lot of fun. Macy’s has several options right now in lucky sizes, so take a peek around. The pictured jacket is on sale for $56.94 at Macy’s. Framed Velvet Jacket

« Suit of the Week: L.K. Bennett
How to Dress for Work in Different Cities »

« Suit of the Week: L.K. Bennett
How to Dress for Work in Different Cities »
Back to Top