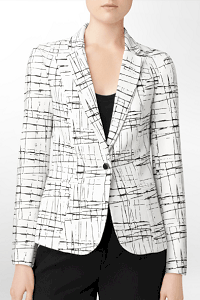 Happy… Thursday! On days like today — where you kind of feel like you should still be on vacation — I like to wear a blazer, just to remind myself that I’m, you know, NOT on vacation. Today I like this fun white and black abstract line print blazer by Calvin Klein. If you want to play it safe, I think this blazer would look perfect with a simple black outfit — a black sheath dress, or a black top and bottom. If you want to walk on the wild side, though, I’d try adding another pattern to the mix — perhaps a floral scarf worn long and loose around the neck. The blazer is 50% off in the Calvin Klein eBay shop

« Fourth of July Open Thread
The Incompetent Boss »
Back to Top