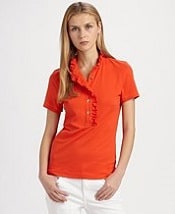 I saw this basic polo shirt at a Tory Burch preview a few weeks ago, and loved it immediately — it’s preppy and feminine but classic, and the tall collar would look great under a blazer. I think it would be a great top, whether with skirts or trousers. It’s available in poppy (pictured), navy and white for $95 at Saks. Lidia Ruffled Polo Top Seen a great piece you’d like to recommend? Please e-mail [email protected] with “TPS” in the subject line. (L-2)

« Suit of the Week: Tahari by ASL
Sponsored Post: The Soft Trench and Flashion Sales — from Gap »

« Suit of the Week: Tahari by ASL
Sponsored Post: The Soft Trench and Flashion Sales — from Gap »
Back to Top