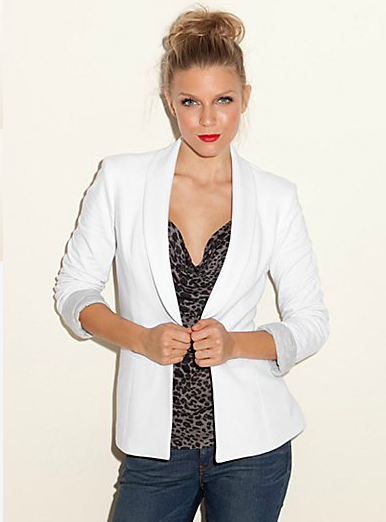 I think this may be the first time that something from Guess is making an appearance on Corporette — yes, it’s a mall store from the 80s, but this looks like a really cute blazer.  The crisp white does look perfect for a corporate meeting at a resort (or just for summertime generally) — I like the gently sloped, almost shawl-like collar, and the slight touch of gray on the lining of the sleeve.  It’s $98 at Guess. Resort Boyfriend Blazer

« Suit of the Week: J.Crew
A Discriminating Woman’s Guide To Buying Jewelry, Part One »

« Suit of the Week: J.Crew
A Discriminating Woman’s Guide To Buying Jewelry, Part One »
Back to Top