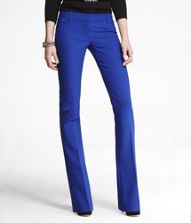 I spied these fun blue trousers a few days ago and have been personally lusting after them — but when I went to the IFB conference yesterday I noticed two or three women wearing this color of pant and looking fabulous. One paired it with a neon yellow sweater, while the others paired it with classic black or white — but it looked pretty hot on everyone. It was daring but classic at the same time, and would be great for a woman who doesn’t mind standing out. This pair is $79 at Express (which offers a matching jacket that I hate, but that’s just my $.02…) Ultimate Double Weave Columnist Pant

Update on Tech Troubles, 9:50 AM ET: Drat; apparently I didn’t fix the stack overflow problem. I’ve turned something else off in the backend; please let me know if that has any effect…  Thanks in advance…

« Tech Troubles? Tell me about it…
Open Thread: Best Magazine Reads? »
Back to Top