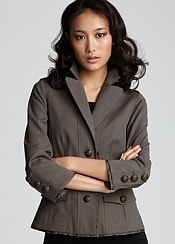 I’m not normally into the military trend, but something about this blazer just looks fabulous. Love the bit of lining sticking out on the cuffs, placket, and hem (is that satin? silk?) and the color and shape seem flattering and sophisticated. (I suspect it’s on sale because the model’s pose does such a poor job of showing the blazer!)  Was $425, now $255 at Bloomingdale’s Winter Sale & Clearance (sizes 0-8 still left). Elizabeth and James Stretch Wool Military Blazer

« Coffee Break: Butter Honey Pump
How to Wear a Pinstriped Suit »
Back to Top