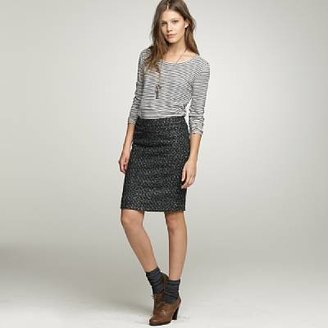 J.Crew has a number of cute tweed pencil skirts right now. We like this one, “crafted in a deliciously nubby navy and green tweed with touches of purple throughout” — allegedly inspired by Vermeer. As with any tweed, we’d wear it with a smoother fabric on top — perhaps a blouse or a lightweight cardigan or sweater. The skirt is $118 at JCrew.com. Moss tweed pencil skirt

« Livening Up Your Office Walls
Previously, on Corporette… »

« Livening Up Your Office Walls
Previously, on Corporette… »
Back to Top