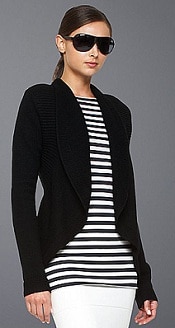 I really like the way this cardigan straddles the line between a sweater and a jacket. The strong shoulders and lapels, as well as the curved hem and fitted details in the back are lovely and blazer-ish, but it’s got the comfort and warmth of wool, as well as an interesting variation in the width of the knit (particularly on the back) that you just wouldn’t get with a suiting material. Even better, it’s 50% off — was $228, now $114 on sale at Lord & Taylor, which is in the midst of its Anniversary Sale. Available in black and gray in all sizes as of this AM. BCBGMAXAZRIA Open-Front Cardigan

« Dressing Professionally with a Cast
Life Lesson #21 »
Back to Top