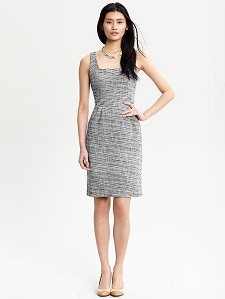 Oooh: cute lightweight “tweed” dress from Banana Republic. I normally think of tweed as being a heavier fabric with different wools (and Wikipedia kind of backs me up), but I like the idea of making a woven dress in a lighter weight fabric. Love the fitted bodice, the square neckline, and the slight pouf at the waist. I’d probably stick with cardigans and shrunken blazers to accessorize this dress. It’s $130 at Banana Republic. Banana Republic Tweed Lena Dress