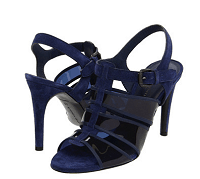 Zappos has a lot of sandals on clearance right now, and while at first it looked to be a pretty ho-hum sale, I discovered a ton of steep designer markdowns. I love these sexy Bottega Veneta sandals in a gorgeous indigo — great mix of leather, suede, and synthetics. Hello, date night!  They were $680, but are now marked to $325 at Zappos. Bottega Veneta – 290310W832 4207 (Indigo/Indigo) – Footwear