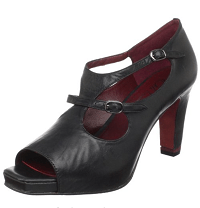 After reading some of the comments on Monday’s post on low heels, I thought I’d share this one for everyone else who’s looking for a good compromise between a gorgeous shoe that makes you want to throw across the room after wearing it for five minutes, and the geriatric-looking shoe that you can walk for days in.  (This is a special problem for me lately as, well, the pregnancy exacerbated some Feet Issues, as well as making all of my shoes about a half to a full size too small. Joy.)  Anyway: I know these shoes don’t look like much on the screen, but they’re a great quality leather, they’re actually comfortable (despite their height), and they — dare I say it — look quite cute on.  I particularly like the way the straps dip down in the front instead of cutting across the ankle.  (Hat tip to Barking Dog Shoes for introducing me to the brand.)  And, hello, sale: They were $204, but Amazon has them marked as low as $52.06 (depending on which size, and which color you get — they’re available in black and a “chocolate metallic suede.”)  Oh! Shoes Women’s Playa Platform Pump

P.S. OH! I forgot! The Barney’s Warehouse Sale is available online this year!  I’ll try to come back and update this post with some picks.  My $.02: check out the shoes first, ladies — they go fast.  Hmmn, in fact stuff is going so quickly that I thought I’d just do some notes: