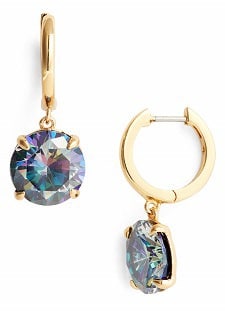 The below content is about the 2017 Nordstrom Anniversary Sale.

Kate Spade has little colorful stud earrings that have been hugely popular for a long time now, and since I hate studs I’ve never pulled the trigger. I love that now they’ve got little drop earrings made with the same colorful crystals — I think they’re fun and a little festive. I kind of like the blackish “jet” (pictured) or the blueish “sapphire,” and there’s a lovely “berry” and “emerald” — but they also have a simple clear crystal with either gold, silver, or rose gold. These are part of the Nordstrom Anniversary Sale; they’re $31 and will go up to $48 after the sale. If you’re not a big fan of these, Nordstrom has these very similar drop earrings that are NOT part of the NAS but on sale anyway! Bright Idea Drop Earrings

Psst: Note that the 2017 Nordstrom Anniversary Sale is now OPEN to the regular public — you no longer need a rewards card to get access!