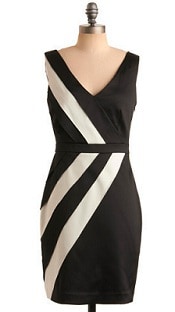 I’m liking this “Beam of Light” dress from ModCloth for weekend/evening wear. I would wear it now in the winter (out to a nice dinner with the hubs, perhaps) with a black boyfriend cardigan and colorful, jewel-toned tights. In the summer (for an evening cocktail party?), I’d pair it with statement jewelry like a long, opera-length necklace and some nude-for-me heels, perhaps with a bright clutch for a pop of color. It’s $147.99 at Modcloth. Beam of Light Dress