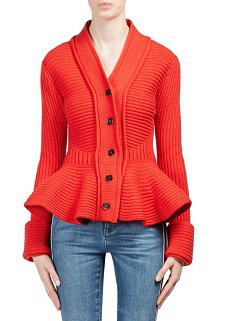 This peplum cardigan looks kind of amazing to me — and it’s definitely a statement piece. I really like the ribbed texture and the fact that you can easily wear it either dressed down with a pair of jeans as shown here, or with a sheath dress or pencil skirt, or a regular pair of trousers. The cardigan also comes in black (available at Farfetch). I think it’s gorgeous, and a great style inspiration. It’s $1,195 at Saks. Wool Peplum Cardigan

« Weekend Open Thread
What Are Your Favorite Stores for Winter Coats? »

« Weekend Open Thread
What Are Your Favorite Stores for Winter Coats? »
Back to Top